CryptPad is built to enable collaboration while keeping data private. All content is encrypted and decrypted by the browser. This means documents, chats, and files are unreadable outside of the session where you are logged in. Even the service administrators do not have access to your information.

In phase 1 we completed most of the technical work on the converter that enables CryptPad to import and export MS Word, MS Powerpoint, and Open Document formats (in addition to MS Excel that was already implemented). We also added additional imports/exports following feedback from users: Trello boards can now be imported to CryptPad Kanban. Our Rich Text application can now export Markdown, and the import/export of Calendar is improved.

In phase 2 we introduced two new applications to make the most out of the new conversion capabilities: OnlyOffice Document and Presentation. We released them as early access to test them with our subscribers on cryptpad.fr and opt-in instance administrators. This new way of releasing new applications was part of broader conversations about future strategy with our DAPSI business coach.

We started integrating the new conversions in the CryptPad interface. Previously, office formats uploaded to CryptPad were treated as static files. They can now be converted into a CryptPad document and then be edited in the relevant application.

We evaluated our work using data we gathered at the start of the project. We conducted a survey in the summer of 2021, between 15th July and 8th September. In line with INTEROFFICE project goals, our objective was to gather data about the needs of CryptPad users in terms of document conversions. We gathered 651 responses over the period. We used this data to evaluate the impact of our work on user workflows, to help elaborate our business strategy, and to identify potential areas of future work.

We counted that nearly 70% of pain points expressed by users at the start of the project have been addressed.

Thanks to this data we were able to draw up a map of how people move their documents between different formats. The map highlights that INTEROFFICE has allowed for significant improvement in the ways that CryptPad caters to the import/export needs of its users, especially when it comes to text documents (.docx or .odt). Comma Separated Values (.csv) remains an under-supported format to investigate in future work. This format poses significant challenges due to the fact that it supports multiple column separators despite its name. We also note that presentations (.pptx or .odp), while requiring the same amount of work as text documents, appear to solve less of a need. However, this map only reflects responses from existing users. It does not represent, for example, the number of new users that might now consider CryptPad as a tool to make presentations while they might not be users of our previous (and severely limited) “Markdown Slides” application. 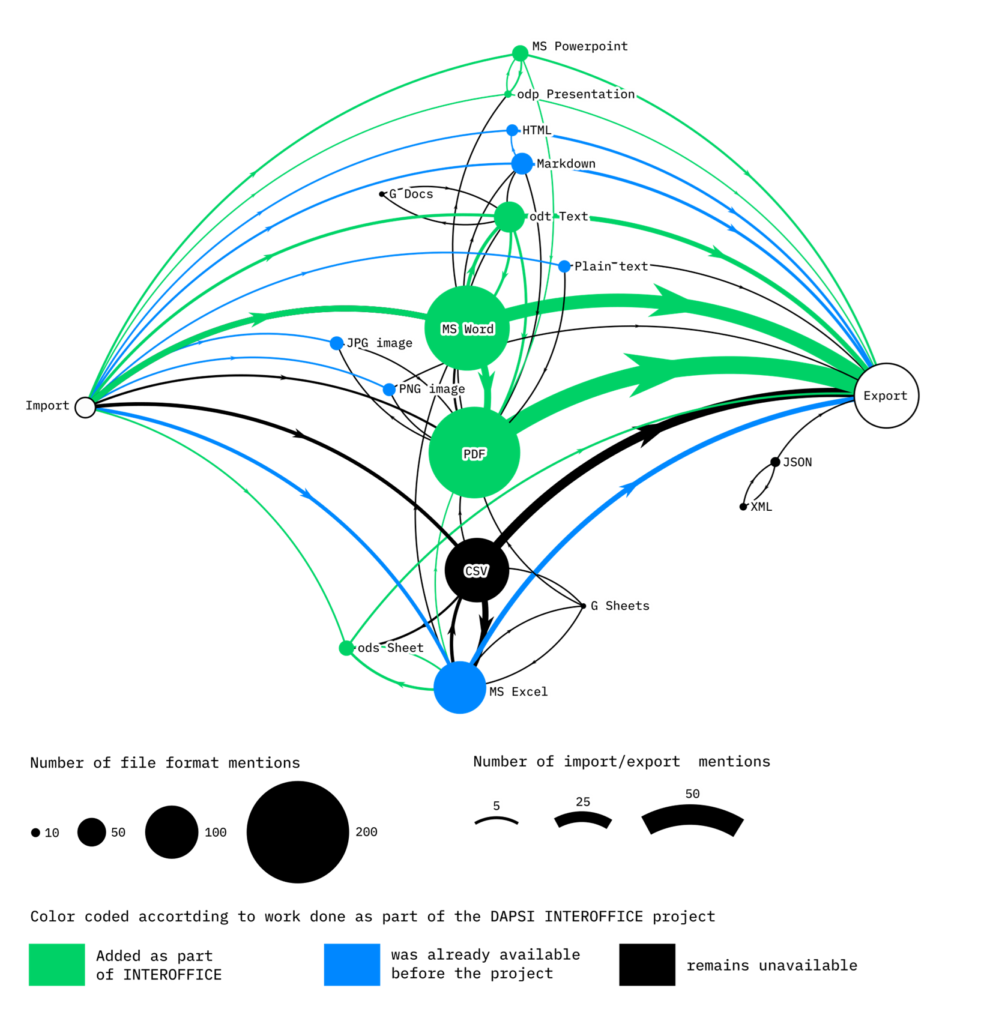 Beyond CryptPad, we have also released our document converter as a standalone open-source repository. Other developers facing similar challenges will be able to benefit from our work and build on it for their own applications.

Being part of DAPSI phase 1 funded our time to work on some long-awaited document conversion features for CryptPad. Making our product more interoperable is key to its long-term success, as it will allow people to more easily transition away from big platforms and towards our more privacy-focused alternative. DAPSI’s support did not end with funding development time however. The addition of business training and mentoring sessions helped us refine our strategy to make CryptPad financially sustainable.