CLISK aims at developing an open-source personal robot system to easily retrieve your data, on your request, on your device.

CLISK is for Client-Side Konnectors. A konnector is a piece of software that mimic user interaction on a website to get her own data, on her behalf. Typically, an Amazon konnector retrieves all the
bills stored in the user account, while a Facebook konnector will get photos with annotations, etc.

We propose to implement the possibility to run konnectors from the client-side, i.e. directly on the user device, under her consent, without any server support. This way, all requests are legitimate and avoid common robot issues such as IP blocking, scraping protection, etc. This is no longer a third-party the user mandates to exercise her portability right, this is a local “user agent” run by the user herself, to enforce her data sovereignty.

This service should be regularly run in order to retrieve the latest data, and it should be as smooth as possible for the user, without compromising her security. Our solution includes the integration with a password manager, to end-to-end encrypt user credentials and eventually, the data itself. 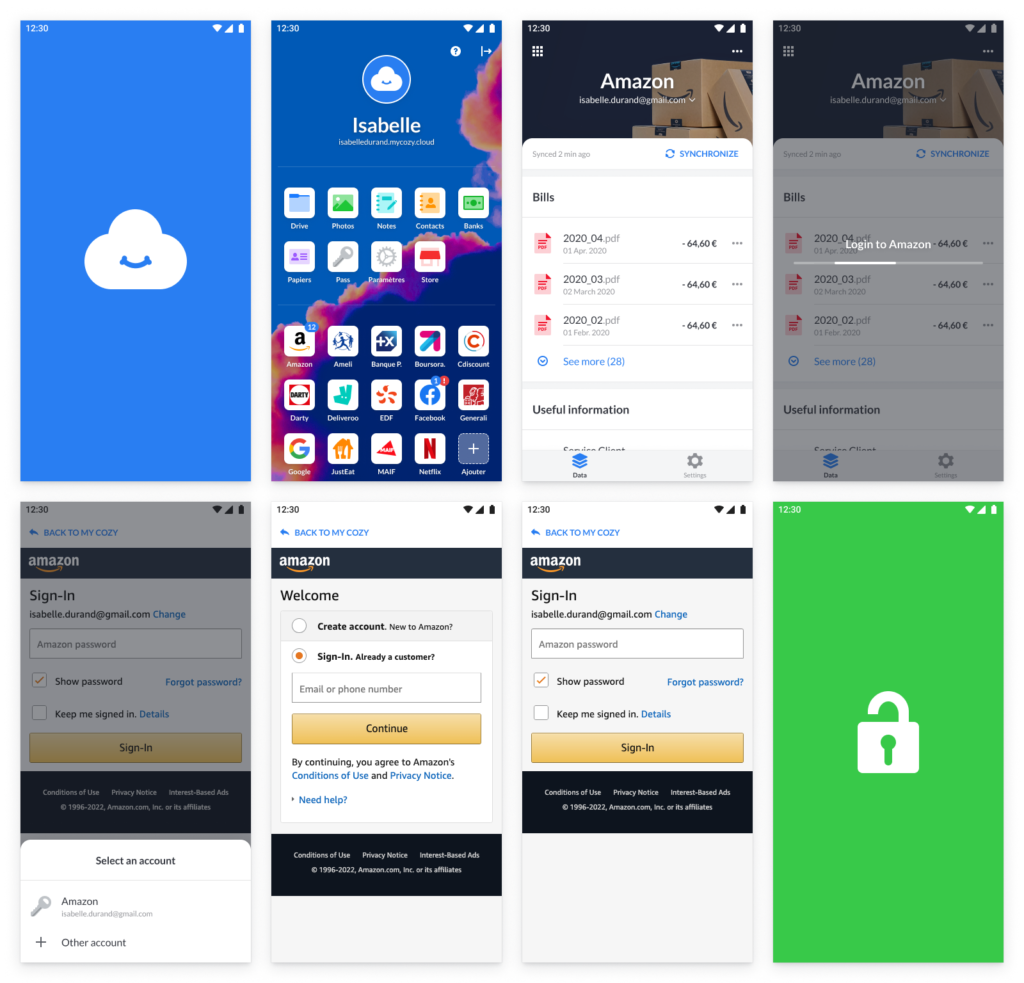 In the first phase of the DAPSI programme we launched 2 demos showing the first run of a connector and its relaunch in the mobile app:

This is a mockup of an Amazon connector:

Without diving too deep in the technical achievement, this sequence diagram displays the content-scripts execution steps in the launcher: 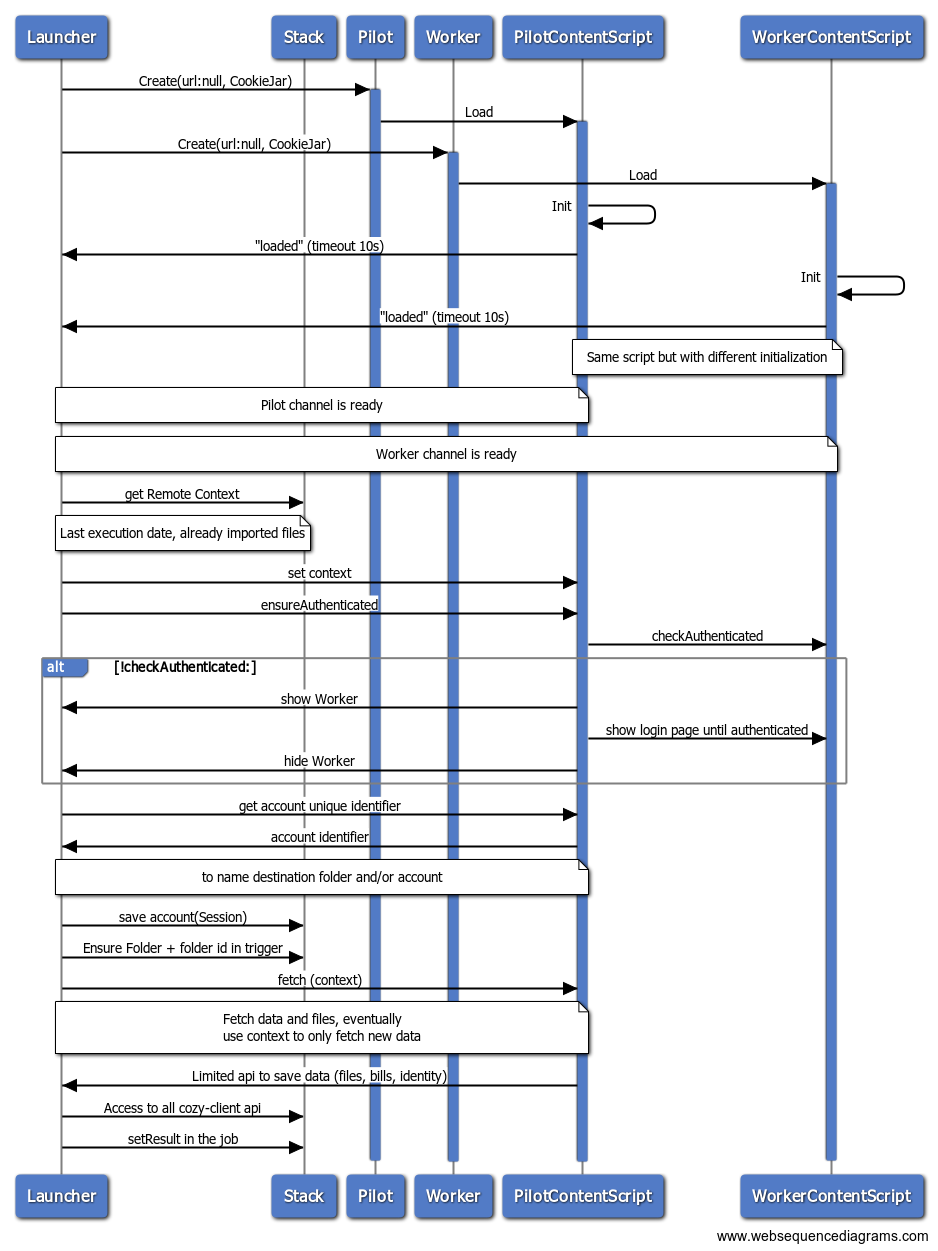 And this one shows the user login steps between the different main actors and introduces the
credentials management: 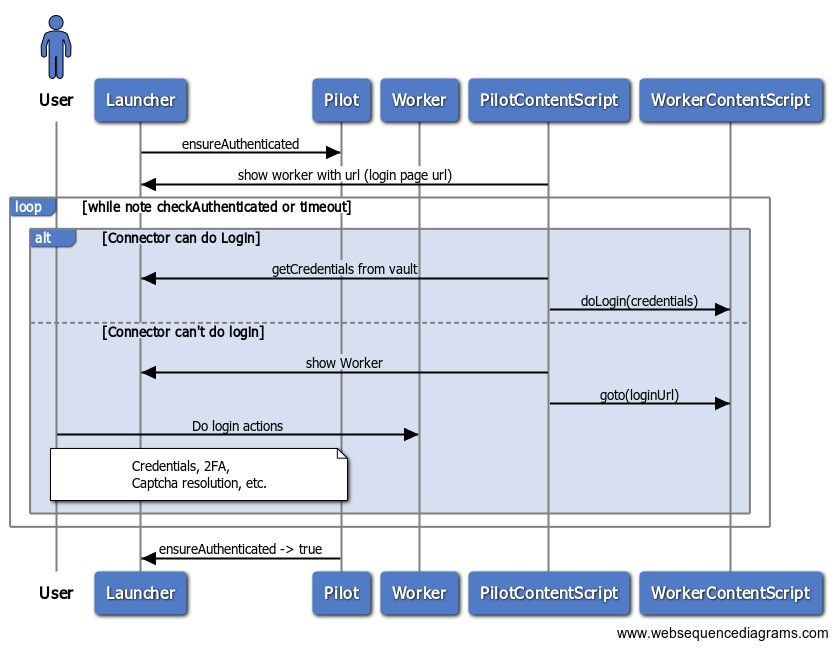 We took a special care into performances during the konnectors execution, as we discovered that some
of them were particularly slow in some devices, which is bad for the user experience.

We also implemented biometry in the mobile app so the user can unlock the private key through the fingerprint or PIN code, and explored more deeply how Cozy Pass could be fully integrated into the app, even though more work must be done to achieve this.

In September, we released a beta version of the app, published to actual users that expressed their
interest to test and review this version.

Finally, a permission dashboard has been developed as well as developer documentation.

The complete code of the mobile app is available in this repository:
https://github.com/cozy/cozy-react-native

The DAPSI programme funding and business advices greatly helped us to reach our ambitious objective to develop a versatile mobile app able to retrieve user data under her consent and provide services to manage files, banking transactions, trips, or any other kind of data. We are already working on new business opportunities based on this solution, including carbon footprint comparison or administrative assistant, and we are looking forward to pursue this project in the next months.

Head of R&D at Cozy Cloud where he is in charge of turning innovative projects from conception to production.

CTO of Cozy Cloud and leads the technical teams to reach the business objectives.

Lead developer for the backend of Cozy Cloud and has been implied in several key developments like the desktop client or security aspects.

Has 14 years of experience as a full-stack engineer and is currently the lead developer on the konnectors at Cozy Cloud.

Lead product designer of Cozy Cloud. He is responsible for the visual identity, the design system and the user experience of the different Cozy applications.

Cozy Cloud is a French company that develops an open-source and privacy-respectful digital home, Cozy, to empower users on their personal data.